Jesus warned us.
Will we listen? 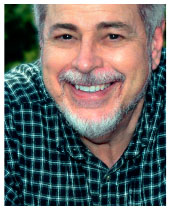 Michael Snee works in advertising and
always
enjoys a midnight canopy of stars.

I started this project in 1983, curious about something I’d read in the Bible––Matthew 24, where Jesus’ disciples ask, “… when will this happen? What will be the sign of your coming and of the end of the age?” Jesus answers: “Nation will rise against nation, and kingdom against kingdom. There will be famines and earthquakes in various places. All these are the beginning of birth pains.”

There have always been earthquakes with some more devastating than others. So why would Jesus mention anything at all about earthquakes? Would there be something unusual or different about those?

At the local library (pre-internet in those days), I felt compelled to research production oil, coal, dams, and cities. Data from the Bureau of Mines, industry journals and other reports revealed huge production numbers in tons, barrels and acre-feet. I struggled to understand what 13,679 to the 13th power really meant. Could I quantify the numbers into a picture that had meaning? For instance, there were graphs of production rates from 1910 to 1985 and their lines seemed like that of a plane taking off, slowly climbing then rocketing to the top of the page––an amazing image and a dramatic increase in just a few short years. But was any of this relevant to earthquakes?

After developing some ways to visualize massive production volumes, I was astonished at how quickly our technology had moved so much weight. Did it matter? Maybe this had something to do with triggering the “earthquakes in various places” that Jesus referred to. And Jesus also warned of larger earth-changing earthquakes elsewhere in the Bible.

During this same time, I’d met a lovely Christian woman and on our second dinner date tried to explain my research and findings, quoting stats and figures. Being very polite, she endured my earthquake topic between appetizers, salad, and broiled fish. Months later we fell in love and were married. Years passed, I collected more and more data and would often share it with her. She’d reach a certain point, hold my hand then lovingly tell me how confusing and boring it all was. With her warm encouraging smile she suggested, “Maybe you could write a book, and put it in there.” Thus EnDvironment.

God bless Peggy, my loving wife. God bless all marriages where two can share enough love to truly help each other in this earthly life, every step of the way, no matter what.

God provides the moments.
We provide the choices.